Time for another 6 month project update. Instead of going over everything we’ve been up to here, we've created a more user friendly, live document on Trello which you can access by following this link: https://trello.com/b/pNbzkl9k/taviana-d ... nt-roadmap (Please keep in mind that the ‘done’ section of the document isn’t complete and more items will be added to it in the coming days).

There you will find everything we’ve done since the beginning of this project, what we’re currently working, on as well as tasks that have yet to be completed. But to get up to speed briefly, in the previous 6 month report we had the following tasks remaining:

Unfortunately some of our team members have had to take more time off work due to the pandemic yet again, so we haven’t managed to finish optimizing all the buildings yet. There are only a few more remaining and we hope to be done with them by the end of January. We also haven’t finished all the programming yet, that will take some more time. In addition to that, the new programmer we hired is unfortunately no longer working with us, but we hope to be finished with it by the end of the 2nd quarter of this year.

We also mentioned that we were having some trouble with the animations due to the pandemic. It turns out that we will have to create our own animations as we cannot keep on waiting for this to end. We will be getting started on that as soon as we are done optimizing the remaining buildings. 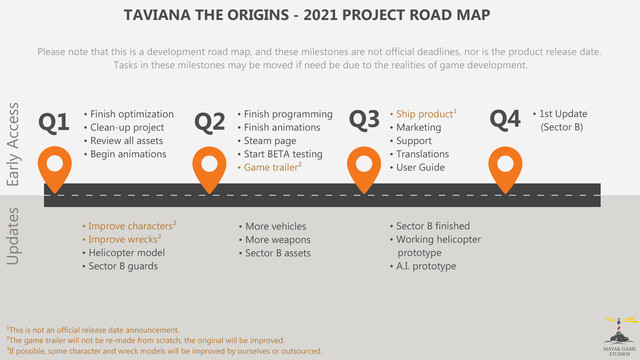 In the 1st quarter we’ll be finishing the things we didn’t finish last year. We would also like to improve some of the wreck and character models that we currently have in game, possibly by outsourcing them if we have the opportunity to do so.

As we’ve finished modelling all the content we wanted to include in the early-access, our design team will focus on creating assets for our first update in which we want to include Sector B and a helicopter amongst other things.

By the end of the 2nd quarter we hope to be done with the programming and animations. We’d like to begin Beta testing, and to remake the release trailer as the game visuals have changed substantially since the original trailer was released in 2018.

In the 3rd quarter we’d hopefully like to release the early-access on Steam and only focus on updates from there. This is not an official release date as all these goals may change due to the realities of game development and the ongoing pandemic. The release date will be announced later this year as the progress we’re making becomes more clear.

We apologize for the delays, we were expecting the pandemic to be over by the end of summer last year but we can assure you that we will be working relentlessly to move the project forward as always.

Thank you for your patience and support, God bless!
Top
Locked
1 post • Page 1 of 1