In the second half of 2021, we moved the game over to Unreal Engine version 4.26, which was supposed to be the final version of UE4. However, 4.27 has since been released to fix a few bugs and became the final version. So, we will probably have to move the game over to 4.27 so that we don't encounter any of those bugs in the future. Luckily, that should be easy as both versions are very similar.

We also managed to launch the wiki, which contains a comprehensive history of Taviana, its towns, and villages, as well as the game plot. We even managed to translate the wiki into many other languages thanks to the community's help!

Among other things, we now have a game cover (which you can find on the wiki). We also created many more weapon models (which will be added in future patches), improved some of the wrecked vehicle models, and re-worked the game trailer to show off the game's new graphics. The game trailer will be released once the Steam page is up and running so it can link directly to it and viewers can add the game to their wishlists.

We Have an Office!

We've managed to rent our very own office for a very affordable price as it was in a pretty bad state and unoccupied for a long time. Once we're done fixing the place up, we plan to hire one or two programmers to physically work at the location along with our lead programmer Alex. (We'll post updates about the office later in the 1st quarter).

In 2022 we will be focusing all our efforts on finishing the programming part of the game, as well as the animations which we didn't manage to finish in 2021. We will also finally set up the Steam page so that fans can begin adding the game to their wishlists and so that Steam's algorithm can see that there is interest in the game. We also plan to finally begin testing with the Patrons.

On top of that, we plan to improve the sound quality of our YouTube videos and start a regular dev vlog which will keep the community better informed about our progress and about what is going on behind the scenes in addition to our regular short and longer videos that showcase game features. (More information about this will be shared later).

We also plan to make a documentary about our development journey, which will shed light on why Taviana The Origins was delayed, the challenges we faced, the realities of game development, and running a business in general to dispel some of the rumors and conspiracy theories that have been going around.

As always, thank you very much for your support and donations, we would have never gotten this far without you. Much love and much respect! 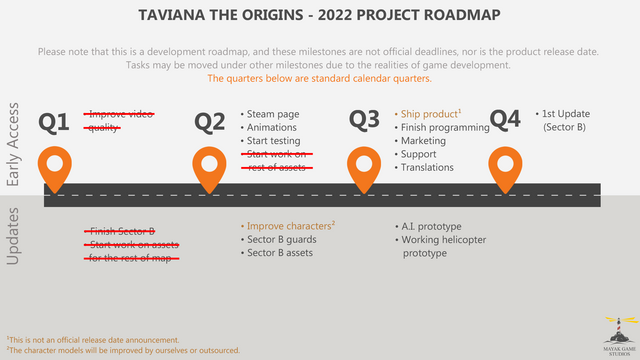