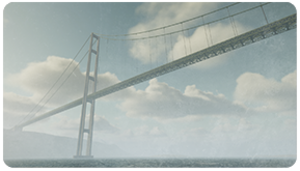 Following the defeat of Germany in World War II, the importance of the role that the Autobahn network played in supplying German troops throughout the war became apparent to Soviet military planners. The Communist Party of the Soviet Union concluded that major cities and military infrastructure in the Soviet Union should be interconnected by a network of highways.

A plan to link the port city of Ekaterinburg used to supply the newly constructed Sector B man-made island with the major cities of Lyepestok, Etanovsk, and the capital city, Sabina, where the republic’s only international airport is located, was submitted by the Central Committee to the Politburo on August 11, 1960. The plan was approved by the 21st Congress of the Communist Party of Taviana on September 30, 1960, and construction commenced in April of the following year.

In 1967 the Soviet Air Forces decided to create a new 1007th Heavy Bomber Aviation Regiment which would be stationed at a newly constructed air force base on the smaller island of Lesh. A new city named Krasnoznamensk would also have to be constructed to house the personnel, so an ambitious expansion of the highway was set into motion by the 23rd Congress of the Communist Party of Taviana.

A grand suspension bridge was constructed in collaboration with architects from Czechoslovakia and the German Democratic Republic to connect Bukvats island with Lesh and demonstrate to the world the architectural expertise of the Soviet Union. Named Bratislav, from the Slavic root words brat (brother) and slava (glory) it was completed in 1970 with a span of 3.3 kilometers (2 miles). The bridge broke the world record as the longest suspension bridge in the world — overtaking the Verrazano-Narrows Bridge in New York, USA. 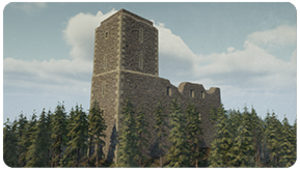 The ruins of castle Bled (named after nearby lake Bled) are located in the Kryvoe district, north of Kryvoe. The cornerstone was laid in 1718 by King Solibor during The Great Ten Year War. This was an era in which the Kingdom of Rustavia was repeatedly invaded by Prussia. The purpose of the castle was to serve as a lookout for ships invading from the southwest, as well as securing the Bashka Luka plateau, and the key city of Kryvoe in case an invading Prussian army landed on the shores. The castle was built out of limestone mined from a quarry north of present-day Mosebach. Construction of the castle was finalized in 1725, and a royal garrison of troops was stationed at the castle up until the end of the 18th century by which Prussian invasions had ceased.

In the 19th century, the castle fell into disrepair and was looted. Much of the limestone making up the castle walls was stolen by locals who used it as building material. During World War II, a signal unit of the 1st Luftwaffe Field Division was briefly stationed at the castle using the remaining main building as a radio tower.

A local legend tells of a former soldier blinded by a cannon explosion during The Great Ten Year War having seen the Virgin Mary in a dream. She is said to have told him to seek a well near the castle and use the water to wash his eyes every day, for three days in a row. After priests and local wise-women skilled in the use of herbs failed to restore the man’s vision, it is said that he finally relented, had his wife lead him to the well, and followed the instructions that he had been given in the dream after which his sight was miraculously restored.

It is believed by locals that a regiment of King Solibor’s army, consisting of 300 men, lay buried beneath the castle prepared to charge out of the ground when the country is at its worst hour.

A legend has been circulating on the island of Lesh since the end of World War II that a hoard of gold and priceless artifacts looted by German commanders during the war was buried in wooden barrels from the nearby barrel factory in Novi Dvor. The barrels are said to have been buried somewhere in the vicinity of the castle as the Germans were retreating in the face of the Red Army. Apparently, the German commanders hid the hoard as they believed that they would shortly return to the island once the Red Army was defeated. The legend was even taken seriously by the Red Army who searched the vicinity of the castle after the island had been liberated. However, no loot has ever been recovered. 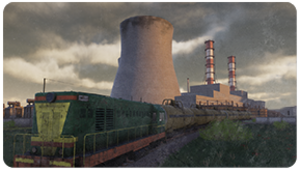 The Treblyanka Nuclear Power Plant (Treblyanka NPP) (Cyrillic: Атомная Електростанция Треблянка, АЕС Треблянка, romanized: Atomnaja Elektrostancija Trebljanka, AES Trebljanka) located southeast of Kryvoe is the only nuclear power plant in the Taviana SSR. The power plant consists of two graphite-moderated RBMK-1000 reactors, each capable of producing 1,000 megawatts (MW) of electric power — enough to power the entire republic. Planning began in the early 1970s as the 23rd Congress of the Communist Party of Taviana decided that the republic’s reliance on the use of coal must end and that the electricity grid must be modernized.

The first reactor was completed in 1980, and the second in 1982. The reactors are cooled using water from nearby lake Bled. Fuel is supplied to the plant using a new railway constructed from the port city of Branibor. As of the completion of the reactors, they have only been used to power the smaller island of Lesh. Plans are being made to stretch undersea cables to Bukvats island after which the republic will be entirely powered by the Treblyanka NPP. The name Treblyanka comes from a village that was demolished to make way for the power plant. 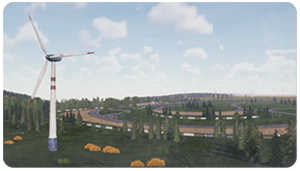 The first automobile race in the Soviet Union took place just outside Moscow in 1924. However, it was not until after World War II when public interest in automobile racing began to grow, and the sport took off. Soviet engineers began designing race cars that looked like Western formula one cars, and by the end of the 1950s, a whole fleet of race cars was designed in the Estonian SSR. Records were immediately set, and in the early 1960s, the first, real Soviet formula one car was produced. One of the most popular race tracks in the Soviet Union was Bikernieki; located in the neighboring Latvian SSR. It was decided by the Politburo that the Taviana SSR should also have its own racetrack. Planning began in the late 1960s, and the track was completed in July of 1970. The first race there was held on the 2nd of August of the same year.

Sector B (Cyrillic: Сектор Б, romanized: Sektor B), also known as Salvation Island or Salvation City is a heavily fortified, man-made island situated a few nautical miles northeast off the coast of the Taviana SSR. It was constructed during the 1950s on the personal order of Joseph Stalin, the then General Secretary of the Communist Party of the Soviet Union. Sector B was originally intended as an experiment by Soviet military architects to construct artificial islands anywhere out at sea to serve as military outposts.

The construction of the artificial island was hailed as a success, and a temporary runway was built there in the early 1960s. A squadron of jet fighter aircraft was stationed on Sector B to defend the natural gas drilling platforms in the area. By the early 1970s anti-submarine helicopters were also added to the arsenal. By the late 1970s, the temporary runway was upgraded to a full, state-of-the-art runway. Infrastructure, including a town fully equipped with a shop, school, and hospital, capable of permanently housing up to 500 pilots, commanders, and airport staff was also built. The by then outdated jet fighters from the 1950s were replaced with 2nd generation supersonic fighter aircraft to provide support for the newly created 1007th Heavy Bomber Aviation Regiment stationed at the newly constructed Bled AB.

After the outbreak, Mayor George fled the capital city with high-ranking government officials and other wealthy residents for Sector B where they currently reside. The base is guarded by some of the world's finest mercenaries and is believed to contain vast reserves of money, rare loot, elite weapons, and possibly documents that could shed light on the origins of the virus.

Please bear in mind that although intertwined with real historical events and figures to achieve a more believable story, all information and events on this page are fictional and intended purely for entertainment purposes. Mayak Game Studios does not express, hold, condone, or side with any historical events, views, entities, figures, or politics described above.
tavianainterestinglocations.txt · Last modified: 2022/05/30 01:35 by admin

Except where otherwise noted, content on this wiki is licensed under the following license: CC Attribution-Noncommercial 4.0 International